Will my wireless link reach where I need it to?

Specifying wireless systems requires balancing the optimum levels of usability, performance and cost. Often the choice is made for us, for instance, when selecting a wireless earphone technology, where Bluetooth is the technology of choice. When considering other uses, e.g. industrial automation or long range IoT sensors, it is important to understand the limitations and to have a realistic expectation of what radio range can be achieved. Here we take a look at some of the key factors including what governs radio range, the physics of wireless communications and what is possible with current technology and current regulations. These factors will help you understand the opportunities and design limitations of wireless technology.

The longest wireless distance you can achieve is governed by a small number of fundamental things. It boils down to how loud you ‘shout’, how hard you ‘listen’ and what gets ‘lost’ in between. The allowable reduction in signal strength between two connections (known as link loss) is the ratio between the strength of signal transmitted and the receive sensitivity. The greater the range of transmission required, the larger the link loss.
All wireless system designers must consider the required antenna performance, radio transmitter power levels, and receiver sensitivity. Once these are known it is possible to design the system so that it meets its requirements and performs correctly without being over-designed. For instance, higher transmitter power can add considerably to the cost, so it is necessary to balance this to minimise the cost of the system while still maintaining performance.
When designing a wireless system it’s important to note that all transmissions disperse over distance and that other environmental factors can also affect the strength of the received signal. Link loss increases with range. Other factors, such as signal shadowing and the effect of reflections cancelling out the signal complicate this picture, a lot.
Wireless system designers start to calculate how much link loss is achievable with the help of this equation: 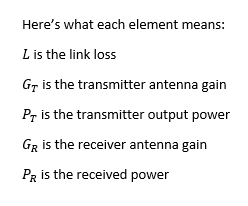 refers to the amount of ‘focussed listening’ and to the sensitivity of the receiver.
The goal when designing a wireless system is for the received power level to be higher than the minimum sensitivity of the receiver with a sufficient safety margin. The challenge is to limit how much link loss eats into the system’s safety margin, which requires selecting the elements of the equation that affect how loud the system ‘shouts’ and how hard it ‘listens’. If you increase

the allowable link loss can go up. It’s a balancing act that requires expert calculation and system calibration.

The physics behind transmitters and receivers in a wireless network rests on balancing data rate and range. Such physics govern what is practical in real-world applications. To illustrate this, we can turn the previous equation into a logarithmic form, so multiplications become additions, and the divisions become subtractions. Unpacking each element will show how it contributes towards calculating what is possible within a wireless system and help reveal the secret to range.
The allowable link loss equation:

We start with the ratio of the gain of the transmitter and receiver antennas. Users normally want handheld devices that work in all directions with no focused transmission which requires omnidirectional antennas. Both

then need to be zero and can in effect be forgotten in the calculation.

We then add the transmit power, a key element governing how loud the transmitter can ‘shout’. If extending wireless range was simply a case of turning up the volume to whatever level was required a designer’s job would be much easier. However, the transmit power of any wireless communications system is limited by legal regulations. Licensing arrangements by regulatory bodies mean that the device or network is not allowed to transmit more than one hundred milliwatts for some ISM (Industrial, Scientific and Medical) frequency bands. These are very small amounts but increasing the transmit power higher will break legal regulations in the common 2.4Ghz band.

Lastly we subtract the minimum allowed received power. P_R is the section in curly brackets and dictates how sensitive the receiver can be. It is the sum of a number of key elements:

R is the data rate, or the rate at which the information is sent. The minimum power required is dependent on the data rate and, unlike other elements that are out of their hands, designers can choose what value this is. They know from the equation that a higher data rate is going to lower the amount of link loss you can have. So, for a higher data rate (often needed for large amounts of information) it is advisable to have a shorter physical range between transmitter and receiver. If only a low data rate is required, the distance can be extended significantly, even when the transmission power is very low. Herein lies a clue to extending wireless range.

This symbolises the signal to noise ratio and is normally expressed in decibels (dB). Essentially this determines how much noise (other signals) is allowed to get to the receiver before communications becomes difficult. Since much of the dominant noise in a wireless system is actually created inside the receiver itself it is possible to reduce this minimum signal-noise level to about zero dB by processing the data using error detection and correction techniques that enable reconstruction of the original data. For many systems the minimum signal to noise ratio is around 10dB. Increasing system complexity by using error-correction or advanced demodulation techniques directly influences the minimum required signal to noise ratio and is the only other element wireless designers can significantly influence in the equation. Some high-capacity, low bandwidth systems squeeze data more closely and need to have a higher signal to noise ration to work well.

Boltzmann’s constant, which is a scientific fundamental relating particle level energy to temperature and designers can’t change that.

Varying data rates allows small improvements to be made where they are needed and for wireless systems to be tailored to the specific needs of the application. Simply put, longer range can imply a reduced data rate. This is why consumer HD video is not streamed wirelessly over large distances, but IoT messages can be sent over many kilometres. If range is important to you, be clear about what data you want to send but flexible about the rate at which it can be sent.

Increasing the complexity of the system

Increasing system complexity is where the biggest gains in range tend to be made in wireless designs. Typically, use of forward error correction is the first step. This is used extensively from cellular communications to spaceborne and satellite communications.

When considering a new wireless system design, or a new application of an existing design, understanding data transfer rates and system complexity is crucial. Engage with wireless design partners who have the expertise to tailor these elements of the systems’ design to your needs. Most modern wireless standards also offer solutions that target specific range requirements, data rates and levels of system complexity.

The 5 keys to maximising your battery life

Approaching the challenge of battery life